Last Monday, during our last Ad Club meeting, we were fortunate enough to gain insights from another industry professional about the advertising industry: Chris Reeves, the founder of 2930 Creative, came to share gems from his own experience from an art director to an agency owner.

He told Ad Club members that he was 30 when he started 2930, and that his wife was 29, and that’s where they got the name. It was as simple as that. The motto at the agency is, “Work hard, be kind, give back, create things.” The culture at the agency is inviting and fun. Reeves said he hosts “Bob Ross Mondays” at the office with his team, which sounds like heaven, if you ask us. 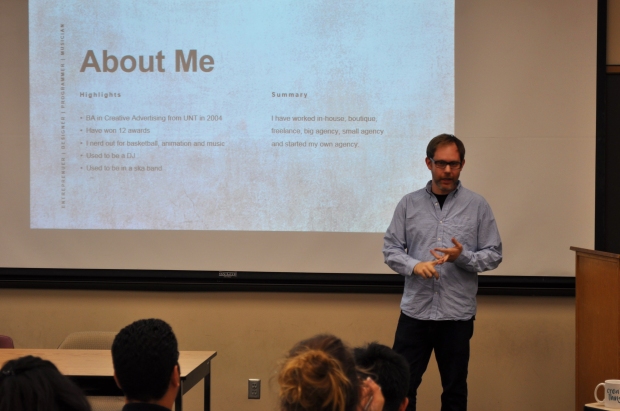 He gave the room several pieces of advice, one of them being that you shouldn’t take your job too seriously. Here are a few other “Industry Survival Tips” that he made note of:

“On day one, you’re gonna be told that something you did sucks,” said Reeves. “Let it roll off [of you and] move on.”

Advertising agencies are fast-moving companies. Your boss doesn’t have time to nurture your feelings. You have to get used to constructive criticism.

After setting a more serious tone after an introduction filled with laughs, Reeves said, “I like to have fun but I also keep it real.”

“Just because someone said you did something wrong doesn’t mean that it’s all on you to fix it,” Reeves said, pouring a leisure helping of hope back into the atmosphere.

Your team members are not your competition. You already got the job. Lean on your peers. Work together with them. Rely on them and let them know they can rely on you.

Get to know your co-workers

“[Get to know your co-workers], not just because they can help you do your job better but … because they could also get you another job,” Reeves said.

Reeves said that agencies are so fast-moving that they have an unintentional “churn and burn” rhythm. In other words, ad agencies work you as hard as they can until you burn out and leave.

If you’re not relying on your team members, you’re going to go crazy. Become friends with them if you can so work can be more bearable and more fun. 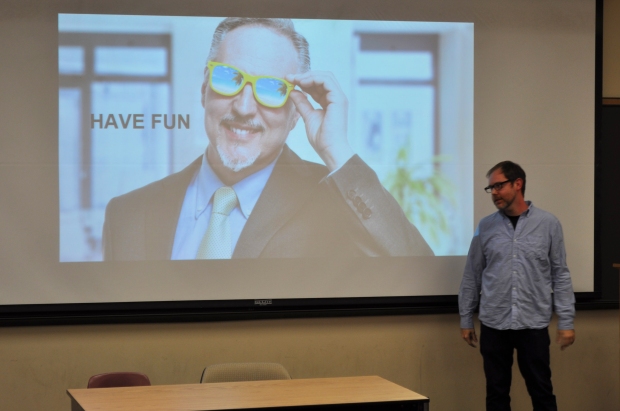 Get to know your clients

There’s a fine line here. You want to get to know your clients, even as an art director, so that working with them can be more enjoyable. If you understand where your client is coming from, it’s easier to understand why they want to make a gajillion changes to the piece you just spent weeks creating.

“It doesn’t have to be rollerblading,” Reeves said, motioning to the graphic on his presentation.

He stressed the importance of finding something you enjoy outside of work, so that your whole life doesn’t suddenly become work.

“PTO is there for a reason,” Reeves said.

Even during the day it’s fine to take a break. Go on a walk. Make sure you take lunch breaks.

“If you bring your lunch, don’t eat it at your desk… Get away from your desk. It’s really important.”

“Just because you can’t spell, doesn’t mean you’re not cool,” Reeves said, much to our relief. “Things move fast – it’s easy to miss something. Go back. Be thorough.”

Always be working on a back-up plan

“This is the realest one that I have,” Reeves said, returning to a somber tone. “I got fired from the agency I was working at for two and a half years… It could happen anytime.”

This is where getting to know your co-workers and clients really comes in handy. Your co-workers could recommend you to an agency where one of their friend’s works, or one of your clients may want to hire you in-house.

(Be careful about the latter point though! Make sure to read your non-compete agreement and ensure that you’re not doing anything that could get you sued by working with that client outside your agency.)

“You guys are mostly designers. Stock photography… it will be a large part of your job… You just need to accept the fact that that’s what’s gonna happen.” 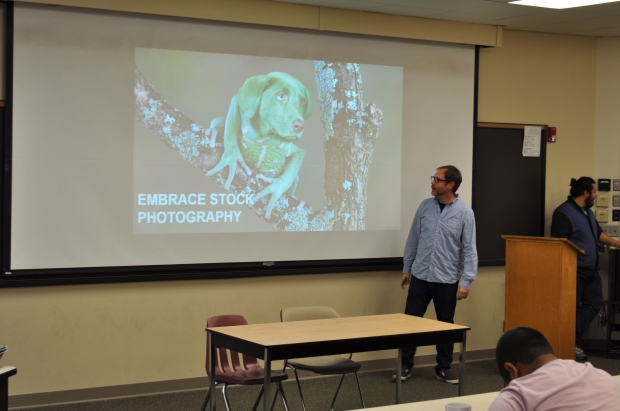 Your agency may have great ideas and great intentions – they may really want to film new videos and host photo shoots and whatnot – but they may not always have a great budget from every client. Stock photography will be your base camp.

Some other note-worthy quotes from Reeves and his wife during the course of the evening were:

“When you’re in a leadership position, always back up your team… No amount of money is worth losing someone on your team.”

“[If I could go back in time and give myself advice, ]I would say to my old self, ‘You’re fine. Keeping doing what you’re doing. It’s OK to be weird…’ I might even say, ‘Stop pretending you’re going to be famous ‘cause you’re not.’”

On that final note, we’d like to point out that Reeves mentioned that there are internship opportunities at 2930 Creative. If you’re interested, send your resume and a cover letter (for goodness’ sake!) to chris@2930creative.com. Be sure to tell him you heard about him through UNT Ad Club.